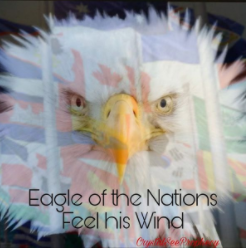 Isaiah 28 – The Crown of Pride

Woe to the Crown of Pride: The Fading Flower is falling!I ran across Isaiah 28 in the early morning. It speaks of the Crown of Pride. It had my attention because as many of you know I have written about this Corona (Crown) for a year now. Then I saw Larry King Died. I instantly knew this was prophetic because I knew it was also God’s timing of Kings and thrones! Larry King was connected to the broadcasting network with CNN.

Larry means Laurel like the leaf in the Greek Victor’s crowns! A wreath of flowers! Bingo!! At Bidens inauguration Lady Gaga mimics her hair in such a fashion as a garland of a braided crown. This scripture speaks the judgment of Samaria which is a “Head” because it sits on a hill. Note:The Us Capitol also is called Capitol HILL! THE HEAD OF JUDGEMENTS IN THE LAND!

A covenant with death it will be overturned! Drunkards of fornication with death and disease. The Passover, last year during the plague, was to awaken their conscience to the ways of unity. However, some closed their ears and eyes to the things of the Spirit, but never closed their mouth. They vomited vile hatred and spewed lies from the swamp of their own bellies! Lies of flies!

Who will stand in the land? Gods plumb line has been in this nation for 4 years, the builder of strong towers, yet some of God’s watchmen have scattered and have not held the line! God sent his word and yet many didn’t wait and watch for it. Why did they make haste? Or be ashamed? Who told them they were naked?

God began a work in this nation, and He will finish it! He is the Alpha and Omega- the beginning and the end. The finisher of our faith! Justice is roaring in as a hail storm. The wind is from the Eagles wings! The Eagle of the Nations will arise with his face like a flint! He comes in with a storm. The hail will smite the lies of injustices, the flood will come into their hiding places. The rains will whip at the corruption tables! God will complete it through his Holy Nation of his Judges and Warriors! Those who stood and spoke his justice and those who war at the gate! Manmade flowered crowns are weltering, withering and falling to the ground! He will trample them under our feet.

“The eagle glances over the whole world and over all time… sung songs over the establishment of Christ’s kingdom, and the ingathering of the nations into it.” Isaiah 25-27

The Lord Will Judge Samaria (the Head, City on a Hill) Capitol Hill.

The splendid crown of Ephraim’s drunkards is doomed, the withering flower, its beautiful splendor, situated at the head of a rich valley, the crown of those overcome with wine.

Look, the sovereign master sends a strong, powerful one. With the force of a hailstorm or a destructive windstorm, with the might of a driving, torrential rainstorm, he will knock that crown to the ground with his hand.

The splendid crown of Ephraim’s drunkards will be trampled underfoot. The withering flower, its beautiful splendor, situated at the head of a rich valley, will be like an early fig before harvest –as soon as someone notices it, he grabs it and swallows it.

At that time the Lord who commands armies will become a beautiful crown and a splendid diadem for the remnant of his people. He will give discernment to the one who makes judicial decisions, and strength to those who defend the city from attackers.

Who is the Lord trying to teach? To whom is he explaining a message? Those just weaned from milk! Those just taken from their mother’s breast! Indeed, they will hear meaningless gibberish, senselessbabbling, a syllable here, a syllable there. For with mocking lips and a foreign tongue he will speak to these people. In the past he said to them, “This is where security can be found. Provide security for the one who is exhausted! This is where rest can be found.”  But they refused to listen. So the Lord’s word to them will sound like meaningless gibberish, senselessbabbling, a syllable here, a syllable there. As a result, they will fall on their backsides when they try to walk, and be injured, ensnared, and captured.

The Lord Will Judge: Therefore, listen to the Lord’s word, you who mock, you rulers of these people who reside in Jerusalem! For you say, “We have made a treaty with death, with Sheol we have made an agreement. When the overwhelming judgment sweeps by it will not reach us. For we have made a lie our refuge, we have hidden ourselves in a deceitful word.”

Therefore, this is what the sovereign master, the Lord, says: “Look, I am laying a stone in Zion, an approved stone, set in place as a precious cornerstone for the foundation. The one who maintains his faith will not panic.

I will make justice the measuring line, fairness the plumb line; hail will sweep away the unreliable refuge, the floodwaters will overwhelm the hiding place. Your treaty with death will be dissolved; your agreement with Sheol will not last. When the overwhelming judgment sweeps by, you will be overrun by it. Whenever it sweeps by, it will overtake you; indeed, every morning it will sweep by, it will come through during the day and the night.

When this announcement is understood, it will cause nothing but terror. For the bed is too short to stretch out on, and the blanket is too narrow to wrap around oneself. For the Lord will rise up, as he did at Mount Perazim, he will rouse himself, as he did in the Valley of Gibeon, to accomplish his work, his peculiar work, to perform his task, his strange task.

So now, do not mock, or your chains will become heavier! For I have heard a message about decreed destruction, from the sovereign master, the Lord who commands armies, against the entire land. Pay attention and listen to my message! Be attentive and listen to what I have to say!

Does a farmer just keep on plowing at planting time? Does he keep breaking up and harrowing his ground? Once he has leveled its surface, does he not scatter the seed of the caraway plant, sow the seed of the cumin plant, and plant the wheat, barley, and grain in their designated places?

His God instructs him; he teaches him the principles of agriculture. Certainly, caraway seed is not threshed with a sledge, nor is the wheel of a cart rolled over cumin seed. Certainly, caraway seed is beaten with a stick, and cumin seed with a flail. Grain is crushed, though one certainly does not thresh it forever. The wheel of one’s wagon rolls over it, but his horses do not crush it.

This also comes from the Lord who commands armies, who gives supernatural guidance and imparts wisdom. The Message Translation

THE SAINTS GO MARCHING IN -THE HOLY NATION RISE UP!