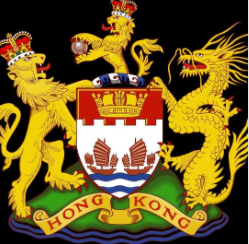 The Bull in the China Shop III

When the Lord told me there’s a “Bull (Trump) in the China Shop” and I find out his mother’s coat of Arms has 2 red flags (two terms- Republican) and it says, “Hold Fast” wrapped in a belt of truth!   You know . . .  don’t mess with a praying mother!

Another part of his coat of arms is of 2 white castles and the running! (White House 2xs). This is why the bull man was in the Capital and what is to come. I wrote this was the year of the Ox! It’s also the Chinese New Year of the Ox! Systems are exposed, uncovered and breaking! His mother’s last name was MacLeodwhich means Lion!

When the Lord tells you, the war is between the Woman (Church-Lion),the child and the Dragon. You go to Hong Kong’s old coat of arms, which shows the great pearl being given to the Lion (Judah) and the Lion wearing the crown.

Then I saw there was controversy over the Trumps family coat of arms in the past.  I noticed a double headed eagle clutching “golf balls”. The devil hates those who are prophetic! Umm . . .  I think it means two terms of the United States and his claws will rule the world two terms.

Donald means ruler of the world btw! When I saw the coat of Arms for Trump in Scotland, I couldn’t help but to notice a hand that comes up with the spear! It appears to rise up from the ashes into victory! 3 bars meaning air, land and sea. The spear is the prayers of the Saints! Ephesians 6!

Last but not least, Trump crest with a Lion: 3 lions of the Trinity. Holding a flag that says. ” Never Concede”! Trump means “drum” in German and “Trumpet” in Middle English! Judah(lion) means praise and here goes the processional March! The whole armor of God is equipped and suited for battle, The Crest and Coat of Arms! We have it all here! You think the military is in place for Bidens inauguration?😂

You get the picture? I do!

“Hold Fast”- Trump is your President!🐉🤺🐯

“Therefore, put on the full armor of God, so that when the day of evil comes, you may be able to stand your ground, and after you have done everything to stand.  STAND!” -Ephesians 6:13