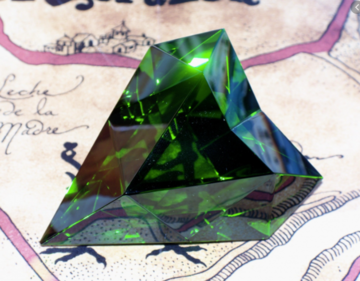 “Romancing the Stone” was an old adventure movie about a lonely romance writer, Joan, who set off to Colombia to rescue her kidnapped sister.  With only a map and a desperate letter from her deceased brother-n-law in hand, she quickly finds herself in the middle of a dangerous adventure!  She met the love of her life, Jack, who bravely saved her and also quickly found himself with her on the perilous journey.

Jack and Joan saved her sister and recovered a one-of-a-kind large emerald just long enough to lose it in the mouth of a huge crocodile.  Jack jumps into the dark murky waters after it and is never seen again.

Joan returns home alone.  She writes a new romance novel about her adventure, and it quickly becomes a best seller.

Obviously, it’s months, maybe even a year later after she had finished her new adventure novel . . .  Joan, who lived in New York City, is walking down a sidewalk with heavy traffic beside her.  In front of her apartment building blocking the traffic is a huge yacht with Jack on it.

“I told you I would be back!” he said proudly, and showed her his “crocodile” boots!

His yacht had the name “Angelina “on it; named after the heroine Joan wrote about in her novels.

In my video on my Blog’ette page are written these words:

If you put God first every day, you can relate to the adventure of living a Holy Spirit led life in Jesus!  Life can be very difficult, but Jesus said . . .

“I have told you these things, so that in Me you may have (perfect) peace and confidence.  In the world you have tribulation and trials and distress and frustration, but be of good cheer (take courage, be confident, certain, undaunted) for I have overcome the world!  (I have deprived it of power to harm you, and have conquered it for you!)  John 16:33   Amplified Version

“Seek (aim at and strive after) first the Kingdom of God and His righteousness (the state of being in right relationship with Him), and all these things (things you have need of in this life and the life to come) shall be added to you.”

In this adventure story Joan found herself in a terrible situation.  She could have given the letter and map to a private investigator, but she chose to go herself.

There are situations in life that we can try to run from and pass the buck to someone else, but as believers in Jesus, we must take those situations and look at them as opportunities to pursue.

Yes, opportunities, because we are winners! (I Corinthians 15:57-58) Nothing can separate us from the love of God!  (Romans 8) He has gone before us and made the crooked places straight. (Isaiah 45) We simply need to follow His leading and trust Him.  (Proverbs 3) The end result is giving God honor, respect and glory!

Esther, in the Bible, was put in one of those situations where she could have passed the buck to someone else . . .  but when push came to shove . . . she chose to go herself, and go face to face with her enemy and the king.  Instead of being a zero, she became the hero, and God used her to rescue her people!

Jesus said, “For there is nothing hidden which will not be revealed, nor has anything been kept secret but that it should come to light.”  Mark 4:22

Joan the heroin’s name means: God is gracious, and God is definitely gracious to us, His Bride.  When we put all our hope in Him, He will be gracious to us, and give us the grace to go through our new doors . . .  however easy or difficult they may be.

Another Bible example could be Ruth.  Ruth was put in a terrible situation also.  She lost her father- in- law, her brother-in-law and then even her own husband and had no children.  Then the only ones left were her mother-in-law, Naomi, and sister-in law, Orpha.  Naomi decided to leave the only home Ruth had ever known, to go to a foreign land where Naomi was from.  Orpha went back to her father’s house, and Ruth was left having to decide what she was to do with her life!  God gave Ruth the grace to make the right decision, so that He (God) could be gracious to her and Naomi, and give them an unexpected life of God’s favor and goodness.  Ruth went with Naomi and was blessed with a wealthy husband who took good care of her and Naomi.  And because of God’s faithfulness to be gracious to Ruth, she was even written about in the Bible!

Jack, the hero in this story, his name means: To overthrow and succeed!  What a great name!  I’m sure when the author wrote this, he had no idea the spiritual parallels that he had achieved.

After Jack saved Joan and her sister, he jumped into dark murky waters to retrieve what had been stolen from a huge fat crocodile.  It looked like he was dead and Joan’s love of her life was gone forever . . .  months later he shows up on a yacht called “Angelina” meaning “messenger of God” proudly displaying to her his new crocodile skin boots!

Now . . . After Jesus was raised from the dead, He returned to His disciples as a messenger of God the Father’s only begotten Son and Savior to the world.  He unashamedly and gloriously proclaimed His victory over Satan and all evil.  With honor to the Father, He proudly displayed His victory to His disciples by His glorious presence.  In this adventure story, it’s seen as “crocodile skinned boots”!

When we are in difficult situations, we need to remember Jesus has given us the victory!  He has killed . . .  skinned . . . eaten . . . and has made a pair of crocodile boots for each us to wear!  We can walk in the fullness of victory in our own “crocodile” skinned boots!

The Gospel: that is the revelation of Jesus!

He has given us a map (Holy Spirit revelation) and a letter (the Holy Bible) to help us find our way.  He has given us a hero (Jesus) to rescue us, and who killed the crocodile (striped Satan and his demons of their authority and power).  Jesus recovered the emerald, and has shod our feet with victory, wearing the very boots covered with the crocodile’s skin that tried to take us out!

And . . .  what is with this amazingly beautiful one-of-a-kind stone?  Us!  We are the stone that He has retrieved from our enemies!   We are the precious ones He has rescued!  Jesus is truly our hero!  We have so much to be thankful for!

It’s amazing to me how Holy Spirit will give us something fun like this to inspire us and show us what He has done for us.  I hope you are encouraged in your walk with Jesus and this life . . .  knowing that the Lord God Almighty has made a way for us to live this life in victory!

Holy Father God, we ask that You be gracious to us Your people and Your Bride!  Open the doors of opportunities for us, and be gracious to us, so that we can go through them giving you honor and respect with our lives . . . and giving You all the glory!

We also thank you for Your peace in the midst of the storms of life.  Your peace, knowing that even though life can be hard, we have Your goodness surrounding us, and taking us where we need to be.